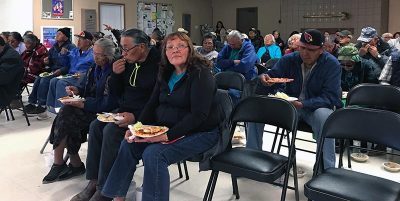 Bodaway/Gap Chapter voters listen as they eat a late lunch Saturday before they vote to rescind the Grand Canyon Escalade resolution.

The proposal to string a tram into the Grand Canyon took a final gasp Saturday when western Navajo citizens pulled out its launching pad by rescinding a nearly 6-year-old resolution.

Bodaway/Gap Chapter voted 55 in favor and none opposed killing all plans for Confluence Partners LLC for the Grand Canyon Escalade project on rim top above the confluence of Colorado and Little Colorado rivers. The Scottsdale developers had proposed a tourist resort/gondola site on 420 acres of Navajoland at Grand Canyon Eastern rim.

“Bil ni’dzil gaal,” or it is” clubbed to death,” declared Leonard Sloan, Bodaway/Gap Chapter vice president, in the Navajo language.

Developers Rial Lamar Whitmer and Albert Hale did not attend the meeting. Few local people, who the partners organized to support the Escalade, were in the audience.

One spoke of jobs that he believed the Escalade project would have created for young people. Another challenged how to control hordes of tourists, who she said created plumes of dust as they streamed in vehicles to the East Rim.

Save the Confluence families, anti- Escalade opponents and advocates, took up the cause to overturn the chapter’s 2012 resolution. The group declared the Escalade legislation  “a defeated project” and it asked chapter voters to do two things:

When the Navajo Nation Council overwhelmingly rejected the Grand Canyon Escalade bill, people believed the fight over the Escalade fight ended Halloween night. Apparently, the council’s action was one part of a colossal victory, said Larry Foster, advisor to Save the Confluence Families, an advocacy group.

Under the dead master plan, the partners had proposed an aerial tram carry up to 10,000 tourists a day from the rim to the rivers. The plan also had asked the tribe to pay $65 million for infrastructure, waive Navajo sovereignty, impose a non-compete clause near the project. In return, the Navajos would receive just 8 percent of the revenue.

Foster, before Saturday’s vote, explained the council’s action won’t stop the partners from rendering and proposing another tourist project on the 420 acres because Bodaway/Gap Chapter gained a local governance certification.

Bodaway/Gap is one of about 45 of 110 Navajo chapters that gained certification, according to Navajo Nation Division of Community Development’s website. Many of the certified chapters have the power to create their own land use plans and several are permitted to select their own developers.

Foster said the Partners continue to lobby lawmakers in Window Rock because they say, the 420 acres of land belongs to them.

It included Earlene Reid, a land user with deep roots at Grand Canyon East rim, who now is knowledgeable about the powers of certified Navajo chapters.

“Albert Hale, if we don’t pull this resolution, can sell the 420 acres to outside investors and those investors can build a hotel or anything they want to make money on the canyon rim,” Reid said.  “I don’t want that to happen. ”

Many people in the audience were ecstatic about the vote. Many grinned, hugged and shared war stories about a six-year fight to save a view of the Grand Canyon East Rim.