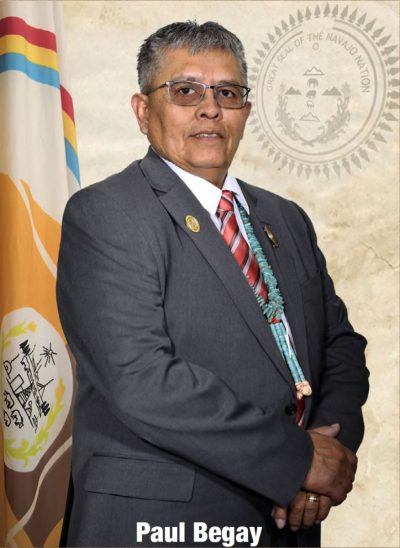 Paul Begay, Bodaway/Gap Chapter council delegate, shared his thoughts about a Phoenix developer. The developer wants a federal permit for a feasibility study of Big Canyon located east of the Colorado and Little Colorado rivers. The Federal Energy Regulatory Commission is collecting interventions and comments about whether the dam is suitable for the area.

“People (developers) don’t think about the land, the area, …they don’t think about the Diyin Dine’e (Navajo Holy People),” Begay said. “They don’t think about the people who use the land. They look at it as a moneymaker…You may not see a church (building or infrastructure there), this is our church. We give offerings to the water, the soil, the canyons, the mountains. That is how we see it because the area is a sacred designation to us. If development happens, it diminishes the reason to exist…who we are (as Navajo people) in the area, it will erase.”

Ultimately, the land users and community have a final say about the development, Begay said.

Lorenzo Morez, 72, runs livestock a stone’s throw south of Big Canyon. He has met too many developers, who are eager to gain access to grazing land, which he uses.

Recently, Morez said he was approached to sign off on a helicopter pad, which a non-Navajo developer proposed to place near his ranch.

“I said, ‘I like this place the way it is, I told them this is my grazing area,”‘ Morez said. “I oppose the dam. I oppose any kind of development because it will bring chaos onto the land. People will bring motor bikes and they will start chasing sheep and cattle for sport. There will be no respect for land users.”

Irwin, who owns Pumped Hydro Storage LLC, said this is the first Navajo opposition he’s seen or heard of. The developer proposes a study to build a dam, reservoirs, drill groundwater for water canals, power facilities, roads and transmission lines within Big Canyon. 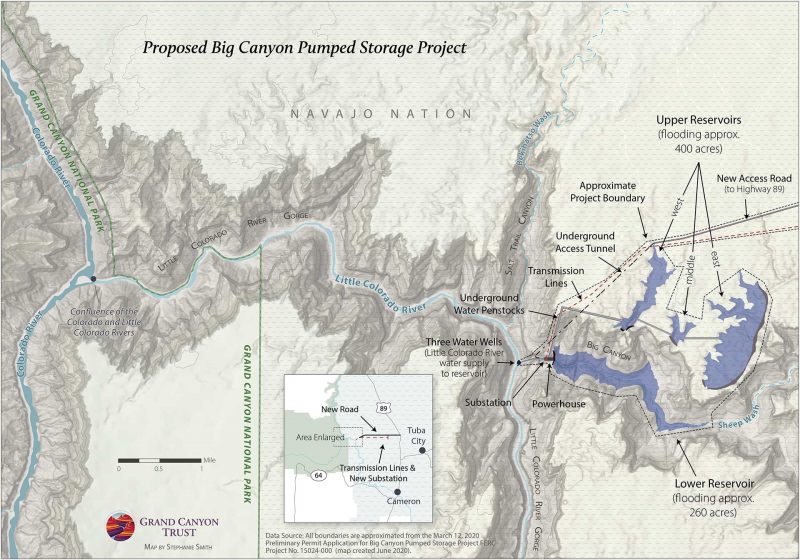 “I wonder what Window Rock would say?  I don’t expect to have everyone on my side,” Irwin said. “But most (Navajos) are interested in the jobs. Not having to leave the reservation to earn a living.  We’e trying to replace the jobs lost from the Navajo Generation Station closure. The opposition really doesn’t care about the unemployed. They want everything shutdown. The world doesn’t work that way.”
The Navajo Nation filed an intervention Thursday with FERC objecting to how the commission ignored tribal sovereignty and issued a  feasibility permit to Irwin in June.
If FERC grants the permit to Irwin, he expects to be on the Nation in 2021. The timeline could change because of the pandemic, he said.
Include Irwin’s plans to pull permits on two dams if FERC gives him the Big Canyon permit. He also indicated the Nation would have a choice about which dam they preferred for development.

If the Navajo Nation denies all dams, Irwin is unsure where a potential site might be. He might explore Eastern Navajo, particular Gallup area, he said.

If the Nation approves one of the dam sites, Irwin said it will take up to three years to test and study to put together a geological, environmental and archaeological  plans.

While environmental activists and individuals wrap up their comments or interventions to send to FERC,  a regional Navajo grazing committee spoke through a June 8, 2020 resolution.

The committee charged with making recommendations to Navajo Nation, Nation Nation Council’s committees and tribal departments voted 3 yes and 1 opposed. The committee objected to the study because of varied reasons.

They said Irwin failed to engage in a meaningful consultation with the Navajo Nation or its departments. The group also noted the developer did not come to them about his plans.

The Nation’s Traditional Cultural Property from extends from the “headwaters in the White Mountains to the main stem of the Colorado River,” known as the Confluence, the committee/’s resolution said.

The Lower Colorado River has a significant role in Navajo ceremonial realm, which are still used in today’s healings, the resolution said. Previously, a tribal official said changes to the canyon violate Navajo oral history and ceremonial histories tied to the river and canyon.

The committee also included a notification to the them by the Nation’s Department of Fish and Wildlife. The department mentioned a biological preserve within the canyon and the rim. The committee also listed  endangered species such as Fickeisen plains cactus and the humpback chub.

Larry Foster, Save the Confluence family advisor, said the resolution will be added to comments and forwarded to FERC.

Grand Canyon Trust, which operates a national trust that supplies funding and staff for projects in the Grand Canyon and the surrounding Colorado Plateau, also placed a petition on its website that opposed the Big Canyon Dam permit. The trust collected more than 60,000 comments, which will be sent to FERC.