The Grand Canyon Escalade bill has stalled but an intense lobbying of Navajo lawmakers continues because proponents seek a thumbs up and opponents want it put to death. 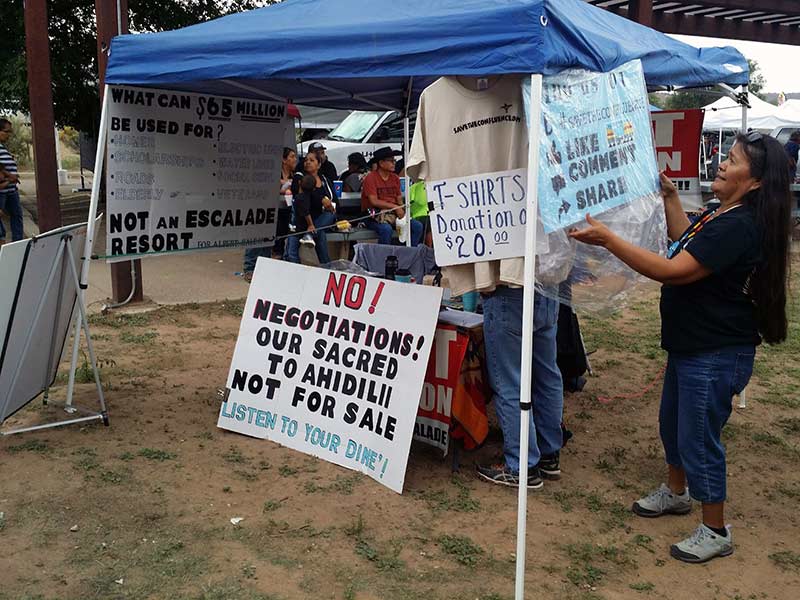 Delores Wilson-Aguirre, of Save the Confluence, sets up a booth at the Navajo Nation Fair in Window Rock on Sept. 9, 2017. (Photo courtesy of Renae Yellowhorse.)

Scottsdale’s Confluence Partners want the Navajo Nation Council to approve a contract with them to start the Grand Canyon Escalade project. They propose the Nation give $65 million for the project’s infrastructure, agree to ban competing tourist businesses around the development and withdraw 420 acres of Navajo land for development.

Escalade supporters are pushing to create a task force of tribal lawmakers. The group would negotiate parts of the controversial bill, which proposes a tourist development at Grand Canyon Eastern rim on Navajo land.

The bill’s opponents are lobbying council members to reject negotiations and put the bill to a vote.

Larry Foster, advisor to Save the Confluence families, said the partners are in talks with council members. Foster said Escalade’s critics also lobby the same lawmakers.

Members of the council won’t go hungry, he remarked.

The vote apparently surprised partners and Navajo Councilman Ben Bennett, Escalade’s sponsor.  Bennett had choices, put the bill on the council’s summer session agenda for a vote or delay.

He postponed the bill to the Navajo Council’s fall session.

Bennett, meanwhile, indicated plans to pursue a task force to settle the bill’s egregious sections. They include questions about how an exorbitant amount of money will be allocated to off-reservation developers when scholarships and funds for community infrastructure are scarce across the Nation. One delegate criticized a competition clause in the bill because it would wipe out his chapter’s effort to develop a tourism site. 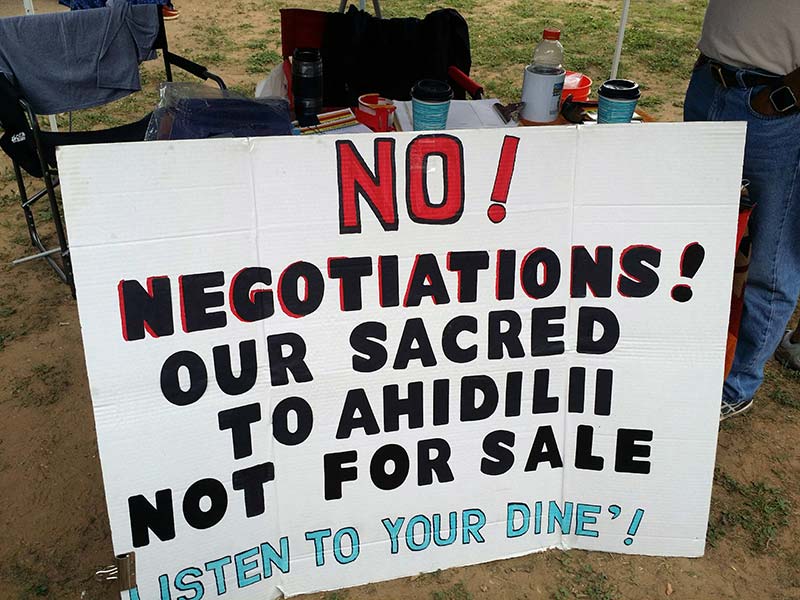 Save the Confluence set up this sign on the fairgrounds in Window Rock for the Navajo Nation Fair on Saturday, Sept. 9, 2017. (Photo courtesy of Renae Yellowhorse.)

Confluence Partner Rial Lamar Whitmer also recommended, instead of a task force, an ad hoc group carrying out negotiations in media reports. This ad hoc most likely would consist of tribal officials from Nation’s Department of Justice, which deemed the bill “legally insufficient.”

Navajo Legislative officials said Friday they are unaware of a new bill and the original bill has not moved. Whether the bill will appear on the tribal council’s fall agenda is Bennett’s decision, they said.

Save the Confluence, Escalade opponents, remain active. They share preservation messages with the public.

After the parade, the group set up near Ke’ info shop at a Window Rock flea market. They distributed anti-Escalade literature, collected signatures on petitions and spoke with Dine visitors.

“A majority of the people, who stopped by were mad that Escalade (developers) wanted $65 million, that it could be used in the (Navajo) communities,” said Delores Wilson, STC member.

STC won’t be available Sunday at the fairgrounds. They will attend the Colorado River Days 2017 Flagstaff today.

The proposed Escalade project seeks to install a tram that takes tourists from the eastern rim of the Grand Canyon to the floor where the Colorado and Little Colorado rivers meet. The plan includes a river walk and cafe near the rivers and the rim would have a hotel, a visitor center, and a parking lot.