Editor’s note: Save the Confluence families continue a plan to make Navajo land on the northeastern rim of the Grand Canyon a protected cultural significant site. But a year after thwarting outside developers from ravaging the area with a tourist stop, the area remains mired in tribal bureaucracy.

A tram will not glide down at Navajo Nation’s Grand Canyon East Rim.

The conceptual battle cry happened on a bitter cold day at Tuba City in January 2012.

The only question among a dozen people at Hogan Restaurant in Tuba City, Ariz., was, who had the energy and time to take the helm of a budding cause named, “Save the Confluence?”

At first, no one answered the call. 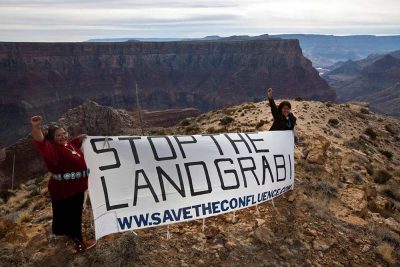 Renae Yellowhorse and Delores Wilson-Aguirre at The Confluence to Stop the Land Grab, December 2014. (Photo by Chip Thomas.)

The first time I heard about a proposal to place a tram high above the confluence of the Colorado River and Little Colorado Rivers, I thought it would not happen. Who in their right mind would put a gondola, which descends into a canyon, on the rim?

Then, the Confluence Partners LLC from Scottsdale came to our Bodaway/Gap chapter to develop a tourist site called Grand Canyon Escalade. The brochures showed the gondola would be the main attraction that drew thousands of visitors to the site.

The developers also promised jobs and money to the local people. Local people liked the idea and gushed, fawned over developers.

My gut screamed. They will take advantage of us.

The partners later launched an ugly campaign to promote their Escalade project to the community. They and their local supporters attacked us. They smeared, humiliated and taunted family members publicly and in newspaper ads.

They alleged the opponents asked for money. They coined us SWARM, using the last initials as identification of families opposed to the Escalade. They printed pictures of people’s houses in their newsletter. They twisted people’s images and words to fit their campaign.

They were tactics to try to stop us.

Then it hit me: They were serious.

Taking the helm of the cause had its own issues for me.

Yes, I grew up near the proposed future home of the Escalade. My extended family — mobile shepherds — had its winter sheep camp, named Tsah Tah, or Among the Sagebrush, about three miles from the eastern rim of the Grand Canyon.

Because of my job, my need to save my sanity and my religious earth-based Navajo faith and philosophy, I had not planned to join the fight. Part of my belief system demanded care about how I spoke Navajo words. My late grandmother Edith told me words have so much power. If spoken badly, they could cause harmful consequences, such as physical or mental illness to me or relatives.

She said, “You should not put yourself myself out there in public, not to raise a stink, and I should always be peaceful and respectful.”

I told myself to let go of the emerging issue. Developers would, eventually, go away.

But the developers were relentless.

The partners and their local supporters questioned our Navajo faith telling us our songs and prayers to the earth were extinct. These folks informed us, God created the Grand Canyon for development and jobs to support families.

I thought about my family and was afraid for them. If I stepped out of my comfort zone to fight developers, what might happen?

My siblings, cousins and relatives encouraged me to stand up against the partners.

When I was about  6 in the 1960s, I remember my mother taking her Tadi’diin (corn pollen), to the Confluence. She prayed for a loved one to come home safely. I did not know it was my older brother Clyde, who had been drafted into the Vietnam War.

Clyde Wilson shares a photo of family members at Bidaa, near the Grand Canyon.

When my brother returned home to the rez, he shared stories about how he coped in firefights.

When boredom broke and bullets started to whiz past his ears, he remembered his Navajo prayers while he heard people yell and cry in the jungle as grenades exploded and guns cracked.

He closed his eyes, calmly pulled out the Tadi’diin and held it to his chest. He repeated prayers in Dine’ bizaad to the Holy People.

Then he became a soldier.

Sometimes, the chaos stopped. Most times, he got his gun to survive.

He showed me his camouflaged-military boonie hat with a hole on the top. The enemy had barely missed my brother’s head.

The hat, my brother told me, reminded him of his time at war and the power of Navajo prayers, which he believed protected him on battlefields.

While my brother served his country in the war, I was a girl, who chased sheep and goats and played among bushes and rocks near the rim especially in winter and early spring.

I imagined bushes and rocks were alive because my grandmother told me everything on earth is alive. I talked to rocks, sagebrush and tall plants, which danced happily after a breeze swept through.

Later in the 1970s, I had my Navajo rite of  passage, Kinaalda, on the bank of a large arroyo (wash) that snakes into the Salt Canyon, or known to hikers as Salt Trail. The charcoal outline of the round corn cake baked in the earth still exist.

A medicine man blessed my journey in a Navajo rite called the Blessing Way. On the last day, he applied white corn mush on my cheeks as a ritual for longevity.

Earlier in the Save the Confluence movement, we had a loose band of family members, relatives and other Bodaway stakeholders and activists lead the fight against Escalade developers. We traveled many times to Window Rock, the Navajo Nation capital, to lobby our leaders.

Though our travels were full of setbacks and rattled nerves, humor helped.

Once, four saniis (Navajo women) drove to Window Rock. We hunted for then-Navajo President Ben Shelly. Our goal was to give him an earful about our opposition to the Escalade.

He had security guards greet us.

During the drive back to Tuba City, we pulled off the shoulder of the highway because one sanii desperately needed a quick trip to a restroom. Infrastructure is rare in remote areas of the Nation.

The sanii vanished into the pitch-black darkness.

Apparently, she slipped into an arroyo-full of dried tumbleweed.

We burst out in laughter. 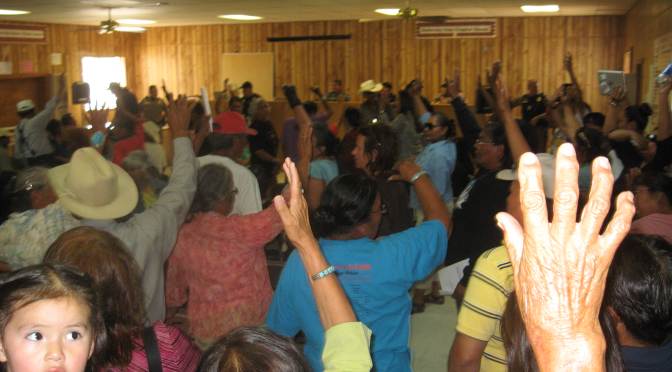 Scene from inside the Bodaway Chapter house after chapter president ordered all cameras and recording devices removed during the vote for the Escalade.

I dreaded going to the Bodaway/Gap Chapter meetings.

There was an eerie feeling left by the Confluence partners when they came to our chapter on October 3, 2012. They, I believe — illegally–  scheduled a meeting and vote for the Escalade project. There was no agenda for this meeting.

People were led to believe the meeting was related to concerns about the community landfill.

That day, I heard the opposition and my late brother Robert, who was a grazing-permit holder, try to voice their concerns. He was not allowed to speak.

Police were visible and cameras and recording devices were forbidden at this meeting.

The vote, counted by then chapter officials, was 59 for the Escalade project and 52 opposed the project.  After this meeting, community members, who had bonded with the partners, taunted us with this vote.

It was time to launch a fight for the undeveloped, pristine Navajo land where I grew up and took my Navajo prayers. 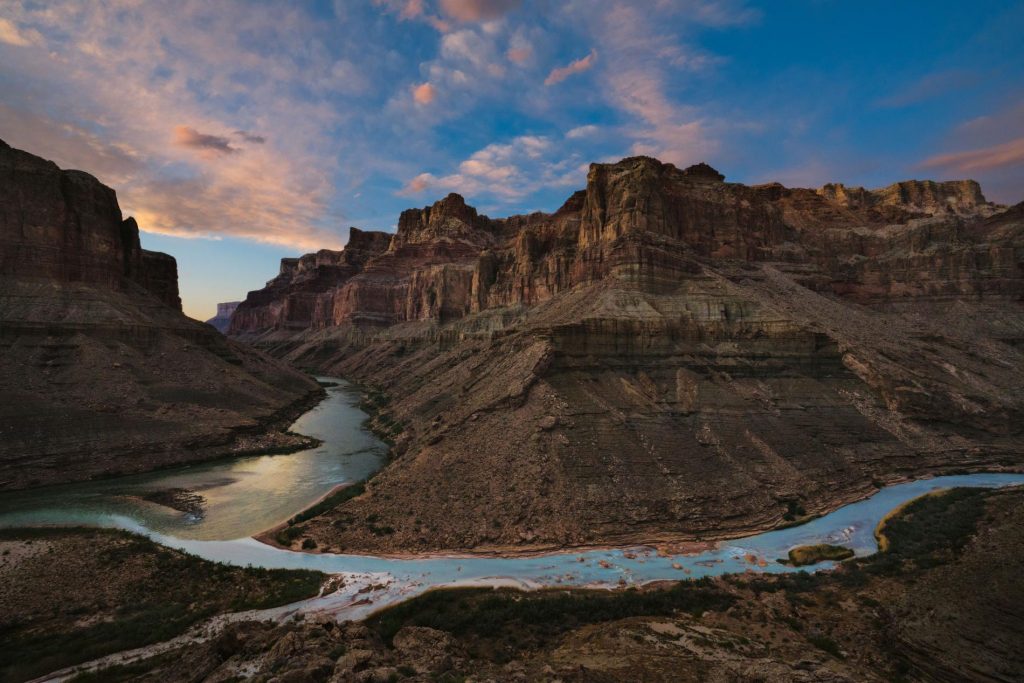 Local tribes regard the Confluence, where the Little Colorado’s blue waters merge with the Colorado, as sacred. Developers hope to build a tramway here to carry up to 10,000 tourists a day to a riverside retail and food complex. (Photo Pete McBride, courtesy National Geographic.)

Other Navajos, including veterans, also took their prayers to the Holy People, which were the powerful Colorado River and Little Colorado River. The Holy people included the sacred-banded sheer walled canyon, and the strong wind that hovered in the vast space between turquoise skies and the earth.

I could not imagine developers razing history and special places, where we took prayers.

I remembered another message my late grandmother told me at my Kinaalda. “Be ready for anything in life.”

Like a lawyer, I applied those words to the chaos caused by the Escalade.

I knew it was the right thing to do.

I told my family we needed help in 2013. We were a small group with exhausted funds.

Lobbying our council delegates was a challenge. We told them Escalade “was shoved” into our chapter, although there was no consent from grazing permit holders, land users and home site lease holders.

I felt our Navajo president and Navajo Nation Council members  squelched our voices. It seemed they were listening to the messages of the Confluence Partners, who continued to advertise in the local newspapers about jobs, jobs and more jobs.

I worried about how our own council man would vote if a bill suddenly came before the council. Although they told us, “I don’t remember talking to you or I never received the mail,” we continued to educate our leaders. 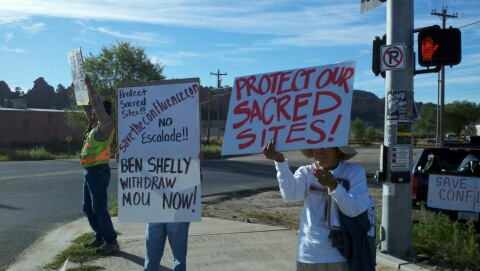 I turned to Flagstaff-based Grand Canyon Trust for help.

The non-profit had a mission aligned with ours, which was to conserve the Colorado Plateau from development, organized Save the Confluence. I took the helm of the cause.

Our structured fight with developers over the Grand Canyon went viral, thanks to the trust.

We bought ads in newspapers, radio spots, had a lobbyist planted in Window Rock and we traveled beyond the Nation spreading our message.

New leaders/death of a bill on Halloween 2017

I grew more confident when Navajo President Russell Begaye and Vice President Jonathan Nez won the election in 2015. They, too, opposed the Escalade. 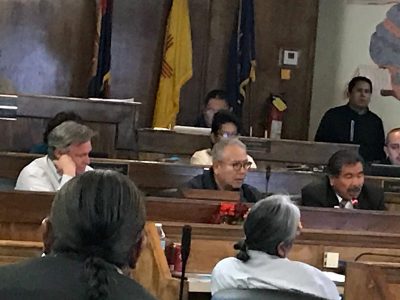 Save the Confluence also received support from then two newly elected young delegates from our area in western Navajo. When the Grand Canyon Escalade legislation appeared before the council Oct. 31, 2017,  they became our fearless torch barriers.

I was not in the audience when the Navajo council rejected the bill in a vote of 16 against the Escalade and 2 for the project.

My family, relatives and our supporters attended.

I received a phone call from our supporter, Navajo archaeologist and firefighter Jason Nez. He told me the Escalade bill is dead.

I had no one to hug or celebrate with because I was at a conference in Phoenix.

I jumped, pumped my fist in the air and yelled, “Yes! Yes!” 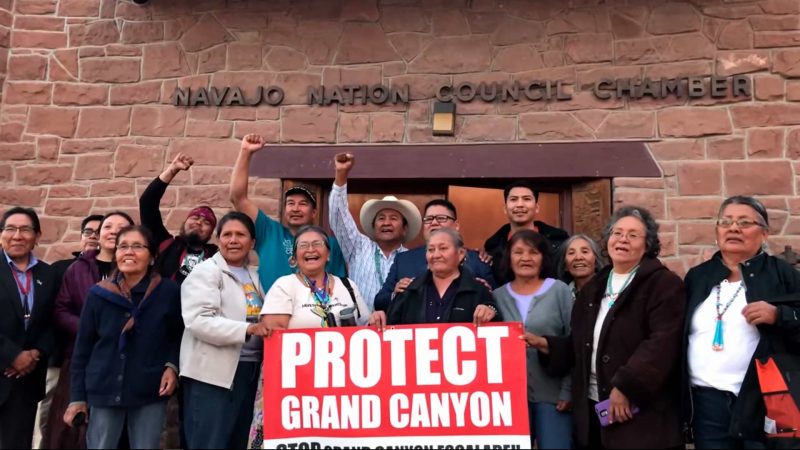 Save the Confluence families celebrate Oct. 31, 2017, outside the Navajo Nation Council Chamber after delegates shot down a measure to build a tourist resort at the eastern edge of the Grand Canyon.

Many thanks to Grand Canyon Trust for their unswerving support. Here is their timeline of how events unfolded: https://www.grandcanyontrust.org/stopping-grand-canyon-escalade.