Amanda Podmore is Grand Canyon Trust’s new Grand Canyon Director. The position had been held by Roger Clark, who retired earlier this year.

Some members of Save the Confluence families continue to live and are land users in the area. They face threats of development from outside interests, who want to take over the land and water in the area.

A Phoenix developer, for example, proposes to build a dam at one of three sites on the Little Colorado River. One is called Big Canyon, which is located east of confluence of the Colorado and Little Colorado rivers.

STC hosted a Q & A with Podmore on issues important to the region. 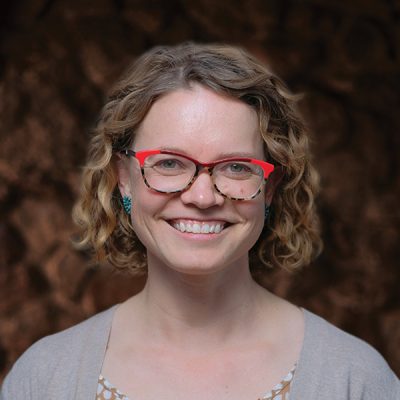 Previous job before GCT: I joined the Grand Canyon Trust in April 2021. Before that, I was a Southeast Utah Conservation Consultant to the National Parks Conservation Association working on a campaign to protect cultural landscapes in southeast Utah at the direction of tribes. Before that, I was Assistant Director at Friends of Cedar Mesa where I spent four years supporting the Bears Ears National Monument campaign.

Academic background: Bachelors in Environmental Policy from Colorado College, Masters in Natural Resource Law from the University of Denver.

Family: My husband and I and our cats and chickens share our time between Bluff, Utah and Flagstaff.

What project, in your previous work, are you proud of?

There is nothing quite as motivating as working to protect your home. A project I am most proud of was fighting a permit to drill and “frack” my town’s aquifer, the Bluff aquifer. The proposal was to drill on Bureau of Land Management lands just a few miles from Bluff through our pristine aquifer, which had never been put at risk by hydraulic fracturing. There was no telling what the long-term impacts to our water supply would be, especially since the analysis fell short of analyzing them.

Critically, the oil wells could impact the water supply at our local Episcopal Mission, which provides free potable water to Diné community members from Montezuma Creek, Aneth, and as far as Monument Valley. Many Diné community members voiced their concerns about the water impacts so the BLM produced a study showing there could be water degradation in a few hundred years. To us, that wasn’t a risk we could take.

As a consultant to the National Parks Conservation Association and a local resident, I worked with local elected officials, community members, and the Episcopal church to organize meetings with the BLM, public forums, and comment writing workshops to alert the BLM and the developers to our serious concerns. You can imagine how elated we were to learn shortly after the public comment period closed in 2020 that the company withdrew its permit application and as a result, lost the oil and gas lease.

The Grand Canyon and the Colorado Plateau is a large swath of land. Many American Indian tribes consider it home and face many threats from developers. How many tribal leaders have you met with? What are the new issues they raised and what would the Trust’s role be in these matters?

A driving value at the Trust is the importance of following the direction of tribal leaders of the Colorado Plateau while also listening to and amplifying the voices of Native community members at the grassroots level. Many community members are faced with the direct and long term impacts of unwanted development and may feel unheard in the processes associated with development. When we meet with tribal community members and tribal leaders and agencies, like the Hopi Cultural Preservation Office or a Western Navajo Agency Chapter, they all raise a similar issue: the “check the box” consultation model is not working. I feel the Trust can support the push for meaningful change led by tribes. We can stand behind tribes and grassroots communities as they advocate for a change in consultation practices at the administrative, regulatory, and congressional level so tribal sovereignty reigns in decisions affecting tribal and traditional lands.

A second issue we hear from tribal leaders and community members is water scarcity. You cannot overstate the fact that water is life. I will be working with the Trust’s new Water Program and its future director to address groundwater quality and quantity protection in the Grand Canyon region, especially where it relates to development and threats to tribes’ water and important springs.

How many American Indian activist organizations will you be working with? How large is the membership? How does the partnership work?

In addition to the Save the Confluence families, we will be working with the Inter-Tribal Centennial Conversations Group on Grand Canyon National Park stewardship, economics, and education. This group represents 11 associated tribes of the Grand Canyon and was formed in 2017 to reframe the narrative of the 2019 Grand Canyon National Park Centennial anniversary. The Trust is also working to support the Native Organizers Alliance’s Red Road to DC journey. This July 2021, the Red Road to DC will transport a totem pole from Lummi carvers in the Pacific Northwest all the way to Washington, D.C. Along the way, they will stop locations of Indigenous environmental justice struggles, like Bears Ears, to amplify local Indigenous movements and call for Free, Prior, and Informed Consent.

Absolutely. This is my number one priority and near and dear to all of us at the Grand Canyon Trust. We believe the Big Canyon Dam remains the developer’s priority, but we are ready to take action when the Federal Energy Regulatory Commission (FERC) makes any decision related to the dams. Should a comment period open up or FERC make a decision about the Big Canyon Dam preliminary permit, we will alert our thousands of members to comment in support of the Save the Confluence families and concerned tribal governments to make sure FERC and the developers know there is no local consent for this project.

The Trust is committed to defending against these three dam projects in the short term and will write comments and get media attention for the issue. But we also recognize that there is a need for a long-term plan. What’s to stop a future developer from proposing a similar project on the Lower Colorado River (LCR) on Navajo Nation land? We need to build long term safeguards for the Lower LCR sub-basin that safeguard its cultural and natural integrity from development. Beginning summer 2021, the Trust and its partners will be meeting with community members, tribal leaders, and agency officials to identify a potential strategy that will protect cultural sites, uphold the tribal sovereignty of Navajo Nation, and find funding for management of the lower LCR.

The Trust wants to continue supporting the Save the Confluence families, first by following their direction and leadership, and second by providing technical support for their campaigns.

I can’t speak to the impacts of the proposed dams on LCR water rights. What we do know is that the Big Canyon Dam would require groundwater for its pumped storage and that could impact the flows and water quality at Blue Spring and downriver towards the confluence. This would likely have severe impacts on humpback chub fish populations.

One of the biggest impacts that doesn’t receive enough attention is the outcome of allowing these dams to receive their preliminary permits without tribal consultation or consent from the Navajo Nation. Does this signal that the needs of electricity users in Phoenix Trump tribal sovereignty? Does this have implications for other FERC-related Indigenous struggles elsewhere in the United States? It is unacceptable to allow a system of regulations that disrespects the longstanding history of our nation’s first inhabitants and their right to free, prior, and informed consent. That is why the Trust will also be advocating for a change in the way FERC approves projects on Native and traditional lands.

Yes, yes, and yes. Permanent protection will require a layering of all three types of policy. First of all, the three proposed dams are in the Navajo Navajo LCR Tribal Park. I believe it will be important to support Navajo Nation Parks & Rec’s management goals for the LCR Tribal Park. A federal strategy will take congressional action in the form of legislation, and will therefore take time, so we’re ready to get to work now on finding a solution.