Instead, the chapter will ask the federal government to deny all permits to construct dams on the river, which is considered sacred to tribes in the area and also a vital ecological and wildlife resource. 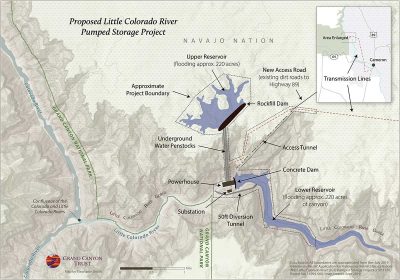 By a vote of 39 to 0, Cameron opposed a resolution that members of the chapter had introduced to invite the developer to present his proposal. By a second vote of 36 to 0, the residents told the U.S. Energy Regulatory Commission they oppose a permit for Irwin to build any dams on the river.

Bob Robbins, a Cameron resident, said that he opposed the dams, based what he called empty promises made to Navajos about the Glen Canyon Dam and the Navajo Generating Station power plant construction.

“When I was a boy, developers promised electricity and running water to Navajo communities,”’ Robbins said. “Those transmission lines, for four decades, have carried electricity over us to Phoenix, Las Vegas. We continue to live in darkness. We also have a view of large bodies of water such as the Colorado River, Little Colorado and water at Glen Canyon Dam. The water benefits Phoenix and other states. Yet, not a drop for us. We’ve hauled, continue to haul, water all our lives.”

Irwin is relieved he did not make the trip to Cameron Chapter on Wednesday. He understood the community has been previously blitzed with proposed projects. 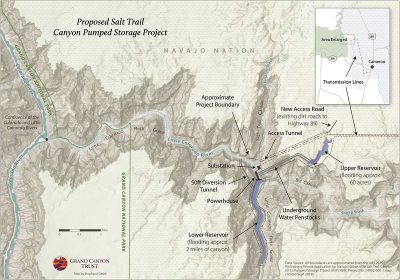 “My Navajo contact in Flagstaff tells me that the Cameron Chapter has seen so many promotions for wind that they are kind of burned out,” Irwin wrote in an e-mail. “Even the Kennedy’s tried to do wind energy in Cameron! It looks like it maybe a long hard sell but that’s okay. Now that I think about our meeting with Navajo Economic development, he seemed to be redirecting us to Page area and the New Mexico side of the reservation. Page is where the current pain is being felt (layoffs).”

The Navajo Generating Station, a coal-fired plant located near Page, shut down Monday after 45 years.

Irwin estimates the cost to build the dam in Salt Trail Canyon is an estimated $3 billion and the Little Colorado River site would be about $6 billion, he said.

Irwin projects each project will offer up to 1,500 construction jobs over five years and up to 100 at build out.

Save the Confluence, activists who defeated Grand Canyon Escalade in southern Bodaway Chapter, has an interest in the dams. Much of Irwin’s proposed dam sites are located within the area.

“There is a lot of layers that Irwin doesn’t understand about the tribes,” Foster said.

Isabelle Webster, Cameron resident, said she voted in memory of her late grandfather’s traditional Navajo faith and philosophy, which she continues to teach her children and grandchildren.

Webster shared her grandfather’s comments about the canyon, which the Little Colorado River flows through.

“I voted for no dams because there are Holy People, who dwell down in the canyon,” Webster said. “My grandfather, named Many Whiskers, told me the Holy People protect us and we respect their space. You don’t go into the canyon willy nilly. I was told, as a Navajo, you give an offering before you go down into the canyon.”