Navajo activists, who stood up to developers eying a gondola into the Grand Canyon, are at a crossroads.

With the proposed Grand Canyon Escalade in the rear-view mirror, Save the Confluence families are struggling with the question: Where do we go from here?

On Sunday, Oct. 17, 2021, the non-profit Grand Canyon Trust, which has supported efforts to protect the Confluence from developers, hosted a day-long gathering that drew about 30 STC members to Fort Tuthill County Park in Flagstaff. The gathering was to craft a strategy for environmental justice for the southern Bodaway Chapter region, which includes the confluence of the Colorado and Little Colorado rivers.

Even though the gondola proposal is dead, developers continue to try to exploit the area. Everything from proposals to drill for water in a land already stricken by long-term drought, to bringing Jeeps loaded with tourists onto the land continue to be pitched. Families, just struggling to survive on the land, as they have for generations, live in shacks with leaky roofs, no electricity and  no water unless it is hauled in by truck.

Above all, the very culture of the people is at stake. Sacred sites where people have prayed are threatened.

“I want to move forward with whatever we needed because the whole confluence issue is still unsettled,” said Shirley Tunney, who lives in Bodaway and whose family raise livestock off the fragile ecosystem. “Make sacred sites a priority!”

Tunney is referring to a 2018 Bodaway/Gap Chapter resolution, when voters approved a measure to turn portions of the Grand Canyon East rim into a sacred site. A three-year-old effort is now underway targeting property that the failed Escalade project identified for a resort above the confluence of the Colorado and Little Colorado Rivers.

A draft bill is slowly moving toward the Navajo Nation Council. Meanwhile, a Phoenix developer approached the Federal Energy Regulatory Commission for a permit that allows him greater movement on the Navajo Nation in his quest to dam up what little ground water that exists in the drought-stricken area.

Pumped Hydro Storage LLC waits for FERC to green-light the project near Big Canyon, east of of the confluence of the Colorado and Little Colorado rivers. The Nation issued an injunction preventing the developer from visiting the site.

View an interactive map below of the area just east of the Little Colorado River’s bend from north to west begins:

With support from local grazing committees, which carry sway with Navajo Nation Council’s Resources Committee, the families added the Little Colorado River and the Little Colorado Gorge to the draft bill. The rivers and gorge are related and are known to have sacred sites.

Tunney, who grew up at Pillow Hill, north of Big Canyon, also wants to make the area a designated sacred site.  Her parents and ancestors have deep roots to the area, and a reverence for the land. She  respects all faiths.

“I’m a Gaamalii (member of The Church of Jesus Christ of Latter-day Saints) … We always knew there was something living down there that was sacred,” Tunney said. “There are offerings and feathers there and we were told, ‘don’t bother it …they are offerings and don’t touch it. It doesn’t belong to you.’  “My father, Sonny Nockideneh said, ‘you can’t throw rocks into the canyon (because Diyiin Dine, holy people,) live down there.’… I’m adamant about making those place sacred places.” 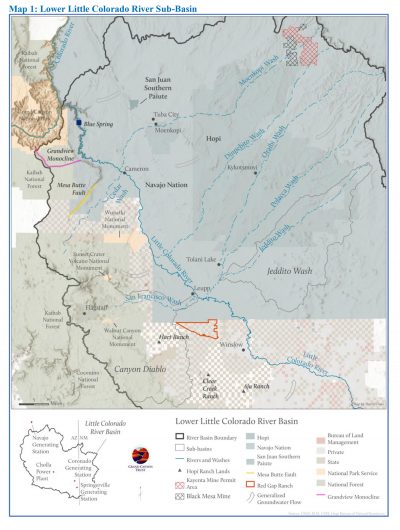 Map of Lower Colorado River Sub-Basin, depicting key areas of interest to Native families seeking to protect the land and sacred sites in the area.

Foster offered recommendations for those interested in helping Save the Confluence. They are:

STC families could support future amendments to federal laws to bolster Navajo Nation sovereignty. Such a change could prevent federal entities, such as FERC, from issuing permits to developers without notifying the Navajo Nation. Big Canyon is an example.

Grand Canyon Trust plans to hold public meetings to inform residents about how to increase protection for the Lower Little Colorado River. Meetings start this month.

For details of the Trust’s proposals, go to https://tinyurl.com/LCRcommunity.

Back to Save the Confluence Families

Sherry Manygoats grew up in Bodaway. She encouraged unification among the families with ties to the land there. She shared her experience as an schoolteacher who visited the Mashpee Tribe in 2019. In Tuba City, she said some children are losing their language.

The tiny Massachusetts tribe, through historical contact with Americans over centuries, lost their land, their culture and language. The Mashpees, working together with neighboring tribes, relearned their language.

“If we don’t come together as a group, united, how much land are we going to lose?” she asked.

Manygoats, who is Tunney’s sister, also listened to her grandparents and parents, who told her about how to treat the land.

“This is Mother Earth, you should appreciate the land you live on because it gives life,”’ she remembers her father telling her. “We were told, ‘every inch of land is sacred.’ It’s not documented. It’s still sacred land.”